Fundraising Wisdom from an Expert

Today I had the privilege of interviewing Terry Axelrod, Founder and CEO of Benevon. Her company offers a sustainable system for fundraising that we have used and highly recommend. With Terry's many years of experience and success as an adviser and coach, she is more than qualified for guru status when it comes to fundraising wisdom.

Below is a link to our conversation.

Terry became involved in fundraising through her own involvement as a parent volunteer at an inner-city school in Seattle. She helped this school raise over $7,000,000 in two years! And they built a multimillion dollar endowment!! The secret? Effective donor engagement, which became the Benevon model.

What does it take for schools to become financially self sustaining?

First it takes a big vision, no matter what kind of school you lead. It's really hard to raise money based solely on need. Is your vision adding classroom space, endowment for teacher salaries, implementing student-centered learning, ...? Next it takes a system for fundraising to engage individual donors. Over 80% of the money given each year comes from individuals rather than from corporations or foundations. School improvement is all about process improvement, and that includes fundraising.

What are the biggest barriers / obstacles in achieving this?

The number one barrier is thinking that fundraising is about having a Development Director, Administrator, and/or School Board that is assigned this task in their job description. Having a team that is well-trained and has a process for fundraising is far more effective and sustainable. This team should include staff, board, and volunteers. EVERY school needs such a team that is committed to the same process and plan. Shared vision is critical, which should be supported by a clearly articulated plan for success. Too often this is a missing ingredient for school success. It's difficult to engage donors in a poorly designed innovation. (That's why the School Growth 48HR Innovation Plan can be such a valuable part of your funding program)

How have you seen schools grow their donor database beyond parents and schools?

So many school say they can't keep going back to the same parents and grandparents. What schools need is a "Treasure Map" that plots the sources of potential donor investments. Once these people are identified throughout the surrounding community, they are invited to a "Point of Entry" event that introduces them to the school's mission, people, and story. This isn't an admissions tour, but rather the needs and powerful narrative of the school so they can see if this resonates with them. The follow up from this initial event gauges their feedback and helps determine whether and how to move forward in the cultivation process. 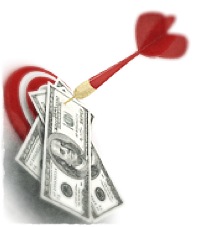 New parents to the school can be asked to host a "Point of Entry" event with people in their network, especially those who have no connection to the school. Generally, these parents are excited and want to get involved in supporting the program. We want to help schools get off the "fundraising treadmill" that goes no where but exhausts everyone in the process. The Benevon program delivers the PROvision to execute the vision, which is critical for all schools: public, private, and charter.

For more information about the Terry Axelrod and the Benevon fundraising system, visit www.Benevon.com.

School Growth is a Yabwi company.