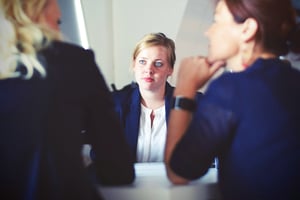 On a recent flight I sat next to a woman who had a very intriguing story. She was once a teacher, and apparently a pretty good one. But she opted to change careers in her early-40’s because she couldn’t take it anymore. Instead she became a flight attendant.

What was the problem? Was teaching really that bad?!

Initially I wasn’t happy with this person because she was the last one to board the plane and the empty center seat between me and the guy on the window was the only available seat. I had hopes for a relaxing nap, but then she said those painful words: “May I sit there?”

Of course I moved so that she could make it a trio in Row 7 for this journey. After getting buckled up, we we're quickly on our way.

The conversation started when I noticed her looking up intently above the door to the cockpit. She kept squinting her eyes to see something and I couldn’t help but ask, “What are you looking for?”

Then she gave me an insider tip: There’s a green light to the right of the “Exit” sign at the front of these planes that indicates whether the WIFI is working or not. (Ah, very interesting--at least I learned something useful from this intruder) Turns out this isn’t a foolproof signal, however, because the light was green but the WIFI wasn’t connecting to the Internet.

So we had a conversation instead.

After some usual small talk, she revealed that she made a career change a few years ago. After teaching middle and high school students for nearly 18 years, she boldly (and perhaps desperately) decided to become an airline flight attendant.

What attracted her to this new career--more money? better benefits?

Her new job pays less and has less benefits.

But not having to deal with the headaches of being a teacher were worth it to her!

That’s what I said. Why was teaching such a bad experience?

Pay attention--Some valuable information is about to be divulged.

She shared three reasons for making this drastic move:

Those are fixable issues, but now it's too late. She burned out on the profession of teaching.

Unfortunately, the experience of this "retired" teacher isn't rare. So many teachers are leaving the profession because administrators and board leaders have failed to effectively create an environment in which they can thrive.

What are you doing to develop a team of talented, energized, engaged educators and then loving them like they are?