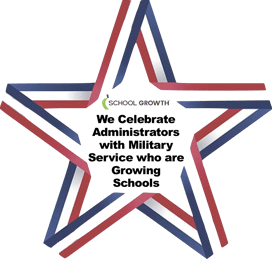 School administrators come from different professional backgrounds: Some from the classroom, some from business, some from military service, etc.

This week we celebrate two post-military service leaders who have distinguished themselves with success in growing schools into places where teachers and students can thrive.

We have the privilege of walking with educators who have a diversity in heritage and history. Memorial Day is a special day in the U.S. to honor people who served in the military to defend freedom and liberty.

This week we honor Derrick Willard and Tom Hood--two gentlemen who started their careers in the U.S. Army and later transitioned to education leadership. Both of them are disciplined, intelligent learners who have honed their craft to become highly effective school administrators.

Derrick Willard serves as the Head of School at Augusta Preparatory Day School (APDS) in Augusta, Georgia. He grew up as the son of two public school educators and later accepted a commission as an officer in the U.S. Army, where he served four years as a Cavalry officer and earned the rank of captain.

After over twenty-two years of leadership in various roles at Providence Day School in Charlotte (NC), Derrick was selected as the new head at APDS last year. In a remarkably short time--that includes the current disruption of the pandemic--he has re-energized the culture at APDS with a focus on humility, high expectations, and genuine relationships.

Like nearly every school, APDS experienced a few years of difficulty and tension. Derrick brought a pastoral approach to the school that acknowledged the history, provided opportunity for restoration, and defined a path forward with a Growth Plan designed to leverage the strengths of the institution and people.

APDS has already begun to reap the benefits of his approach, with a renewed enthusiasm across the campus, a commitment to the disciplines of Leadership Capacity, and strong enrollment momentum. The future is bright in Augusta.

Tom Hood is the current President at St. Agnes Academy-St. Dominic School (SAA-SDS). He served 22 years in the United States Army, including four years on the faculty at the United States Military Academy at West Point. Before retiring as a Lieutenant Colonel, he served in various command and staff roles with overseas deployments.

For ten years Tom was an administrator at MMI Preparatory School (PA), and then in 2016 began his tenure in Memphis to lead these two historic institutions through a new season of growth. He combines a passion for learning with a strong commitment to loving and supporting the faculty.

Through the Growth Planning journey over the last several months, the leadership at SAA-SDS has discovered their organizational genius and defined a compelling brand narrative that more effectively communicates their story. While change is uncomfortable, Tom has demonstrated that an organizationally healthy school will find a way to grow even when facing fierce competition and disruptive times.

School administration requires courageous leaders like these two veterans who are making a significant impact on their schools and communities. We are grateful for their service.