Anchors Away to Navy Careers from Miss Communication 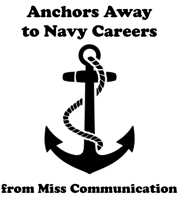 Last week two career military leaders in the Navy were involved in a "miss communication" fiasco that resulted in painful career and relationship disasters for them both. These were avoidable circumstances that could have gone very differently had they understood The Laws of the Grapevine and practiced the discipline of Sequence.

The speed and accessibility of communication media today requires a new set of leadership disciplines, especially for educators. Hopefully  you can learn from these situations in order to avoid the devastating consequences.

The Miss Communications of Crozier and Modly

Capt. Crozier was the commanding officer of the USS Theodore Roosevelt. He brazenly wrote a letter critical of top Navy leaders regarding what he felt was an urgent need to protect his crew from the coronavirus--and this communication somehow made it into the hands of certain media outlets.

He clearly was unsatisfied with the information and decisions of those above him, so he decided to increase the pressure on them by using the media. That decision resulted in Crozier being quickly expelled from his command in a manner that certainly wasn't on his career plan.

After removing Crozier from his position, Acting Secretary Modly flew all the way to Guam on an expensive private jet to address the crew over the ship's loudspeaker system and blasted the prior captain for his insubordination: “It was a betrayal of trust with me, with his chain of command.”

Both of these men are very intelligent and well-trained. Mr. Modly, for example, graduated from the U.S. Naval Academy, served as a pilot in the Navy, was a professor at the U.S. Air Force Academy, earned a Master of Arts from Georgetown University, and was awarded an MBA from Harvard Business School.

How could such smart and capable men fall into a very predictable trap through a series of miss communication decisions? It's actually easy--too easy!

They Violated the Law of Sequence

By surprising the people above them in the organization with inappropriate messages, these two men embarrassed their leadership and violated trust. By their own admission, they lost perspective in the midst of emotional outrage.

"When I walked on the quarterdeck of the [ship] I lost situational awareness and decided to speak with them as if I was their commander, or their shipmate, rather than their Secretary," said Modly regarding his resignation. "They deserved better, and I hope that over the passage of time that they will understand the words themselves rather than the manner in which they were delivered.”

Had each of them followed an appropriate Communication Sequence, they would have escaped the agonizing embarrassment and exhausting damage control to their careers and reputations. Similarly, we often hear from school board members who lack confidence in the school's leadership because of the manner in which information is shared.

Modly failed to Read the Room

During his rant on the ship’s intercom system, Modly attacked the character and leadership of Captain Crozier. For many on that crew, Crozier was their hero because he put his career on the line trying to advocate for their safety. A few days earlier they cheered him during his departure.

Modly failed to “Read the Room.” Instead of empathetically understanding the prevailing emotion and the perspective of the “audience,” he reacted with emotion in a stinging, profanity-laced rebuke.

Seldom is much achieved by attacking the previous leadership, yet this mistake is frequently made by new school administrators. Rather than focusing on whatever happened in the past, effective leaders seek to establish a culture of trust and engagement that is energized by a renewed vision.

These are important lessons for every leader, and particularly for administrators. Schools are very complex organizations that require sustaining an ecosystem of key relationships. This only happens through disciplined leadership that knows how to wisely and effectively use modern communication methods and media.

Tags: Communication, Laws of the Grapevine