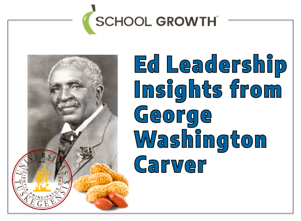 Why are you an educator?

Is it because you experienced the joy of learning in your formative years and want to pass that on to the next generation?
Is it just a job that pays the bills?
Does it give you the opportunity to achieve a greater purpose?

For George Washington Carver, education leadership was a pathway that allowed him to do what he loved and inspired many generations after him.

Education is the key that unlocks the golden door to freedom.
— George Washington Carver

Mr. Carver was born into slavery as a frail and sickly child who could not help in the fields, so he was taught how to cook, do laundry, garden, and produce herbal medicines.

After enduring multiple foster homes and various levels of school quality, through his perseverance and faith, he became the first African American to earn a Bachelor of Science degree, and a few years later earned a Master of Agriculture.

He was an amazing example of perseverance!

The Stresses of Being an Administrator

Shortly thereafter, Mr. Carver accepted an offer to serve as a teacher and administrator at Tuskegee University. He quickly learned that school leadership is complex and difficult.

The farmers he sought to help believed they already knew everything about farming.

Many of his faculty colleagues resented him because they heard he was paid a higher salary and given other privileges.

Mr. Carver just wanted to devote his time to research, but his job assignments also required him to manage the school’s farms, teach classes, maintain the campus toilets and sanitary facilities, and participate on multiple committees.

The Model of an Educational Leader

So many valuable lessons can be learned from this courageous educator:

Education leadership is a noble calling that gives you the privilege of unlocking the door to freedom and creating a brighter future. It's hard work that's worth it.