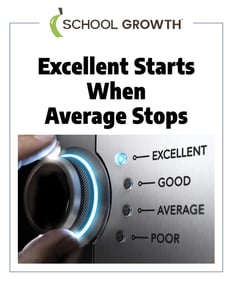 Putting "Excellence" on the website or in the mission statement doesn't make it true. Excellence starts with a resolute commitment to stop doing average.

Your calling as an educator is one to Excellence, not average!

As you know from your own experience, enrollment isn't a reliable indicator of excellence. Some average schools are barely hanging on and some average schools have achieved success. That success can blind the leadership to the underlying dysfunction as they succumb to the allure of confidence and complacency.

"We're the best school in our area.
Our teachers are so much better,
we have an excellent family environment,
and we have way more integrity than them."

Average appears safe while being rife with risk. Don't rock the boat and avoid hard decisions.

Average schools are adept at making excuses. That's just the way it's always been.

Average schools are plagued with factions and siloes. Dysfunctional behaviors and internal conflict are tolerated to "keep the peace."

Average schools refuse to listen. They say "I know" incessantly, ignoring the realities all around that indicate otherwise.

Average schools have poorly trained boards. The leadership is fragile and vulnerable to newcomers who can sow seeds of distrust.

Average schools have a confusing brand. Inconsistencies in the quality and experience produce noise that is easy to tune out.

Average schools have make weak talent decisions, (re-)hiring for credentials rather than competencies and commitment.

"No man can avoid being born average, but no man has to stay average."
--Satchel Paige

Whatever the cost, the price of sustained excellence is far cheaper than the damage of average.

Excellence starts when average stops. The first step is to get honest about and humbled with our own reality. Becoming excellent requires a willingness to develop an accurate picture of where we are and the decision timeline that got us here.

Then you can focus on where we want to go and start developing the disciplines of effective school leadership and a relentless tenacity of mission.

It's a journey that is only taken by those with authentic courage and commitment. Along the way, you will discover a deeper love for your people and a greater joy in your leadership.

You can start anytime, and the optimal time is now. Some begin with a Leadership Retreat to refocus the team, while others opt for training and support to start building momentum.

If you're ready to break the habits of average and lead your school to excellence,

"It is never too late to be what you might have been."
--George Eliot