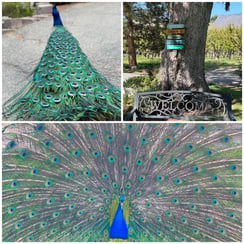 Prince the Peacock was beautiful, with blue and green feathers that were a sight to behold.

We met him over the weekend at the Warm Springs Inn (which we highly recommend, by the way) in Wenatchee, WA.

Despite all of his investments in marketing himself, Prince remained frustrated and unable to accomplish his goals. (perhaps a little like your school)

His peacock plumage was quite a display out in the cherry orchard.

He would strut around with great pride, even vibrating his train in order to attract a female.

According to the experts, Prince has all the right stuff. They found that the most successful peacock male has the shimmering blue-green color in his tail eye-spots.

But Prince failed miserably. And he was the only peacock in the orchard.

Day after day he tried, but no hen would respond to his marketing message.

Why? What's wrong with Prince?

Well, you see, he didn't understand his target community. Prince was advertising himself to the chickens in the henhouse and around the yard.

And they were wholly uninterested in his display.

It didn't matter what he tried, not one of those chickens would pay attention to him. They  ignored him and just continued about their day, doing what chickens do.

It was sad to watch this confused ornate bird experience disappointment day after day, but Prince also provides valuable insight.

Sometimes education leaders get confused about their target community and recruiting strategy.

Assumptions about their wants and motivations produce messages that are just noise and largely ignored.

Efforts at Communications, Marketing, and Public Relations get intermingled and confused, making it hard to measure what's working and what's not.

Sometimes these efforts produce inquiries, but they're often the wrong fit for the mission, culture, and goals.

Rather than step back to re-evaluate who they are and who they want to serve, they double down with more money spent on marketing to buy clicks, followers, and friends.

The authenticity of who you are and your deep understanding of your target community of faculty and families is the core of your marketing strategy--and it's the beginning of your path to Sustainable Excellence.

LET'S TALK if you'd like to explore how you can get a better return from your investments in communications and marketing.