News that Matters to Educators June 2020 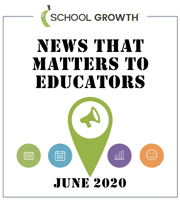 News that Matters to Educators:

1. Heads Conference reveals confidence in getting back to normal

2. Leaders of a small business in KY just paid $150,000 as a ransom to regain access to their computers and data

3. The U.S. is officially in a recession, and it's expected to be worse than the last one

In our review of global news sources, the School Growth team has identified three articles that have important implications for education leaders.

At a conference for private school heads last weekend where we served as facilitators, over 90% of the participants expressed confidence about opening on time for 2020-21 and had high hopes for returning to pre-pandemic operating status.

63% said they expect a decline in enrollment and revenue, and all indicated they have already adjusted their budgets downward to account for the impact of the economic recession.

From the dialogue in the sessions and in small group conversations, the commonly expressed objective was to "get back to normal," with the general consensus being, "this too shall pass."

The disruptions of 2020 provide an unusual opportunity for systemic innovation in all aspect of the school--especially to the value proposition and story. School leaders have some challenging decisions ahead, and the current crisis provides substantial cover to make needed improvements.

You might assume this only happens to big businesses, but the attacks on the systems of smaller organizations is rampant too. A small business in Kentucky recently paid a $150,000 ransom to regain control of their computers and data.

They only had eight computers but were unable to continue operations without access to their systems. After making the payment through a third party contractor, they were able to again use their PCs and information. (Source: techrepublic.com)

Sometimes it feels like the IT person at your school is overly protective when they insist on security policies, but it's highly likely your school is going to be attacked by nefarious actors from anywhere in the world.

That company in KY didn't go to the authorities because no one wants that kind of news getting out about their vulnerability. This is happening far more often than is publicly known, which means systems and data security should probably be moving up on your radar.

The U.S. is in a Recession and it's BAD

Not surprisingly, it was announced last week that the U.S. (and most of the world) is now officially in a recession that actually began back in March. This was the fastest declaration of a recession that has ever been made--it usually takes a few quarters to figure out what's going on.

Some other forecasts released last week are even more troubling, and will have a direct impact on the education marketplace. As reported on Forbes.com:

"UBS reports that more than triple the number of retailers will close their doors over the next five years than shut during the last recession. That’s upwards of 100,000 retail stores to be shuttered, as the number of U.S. retail stores will decline from 883,000 last year to 782,000 by 2025."

A critical mind-shift has occurred this year as families have drastically reduced purchases of non-essential goods and services because of less discretionary income. They are also making more purchasing decisions using online guidance and services. This makes your school's digital presence (e.g., website, social media, content, etc.) even more critical.